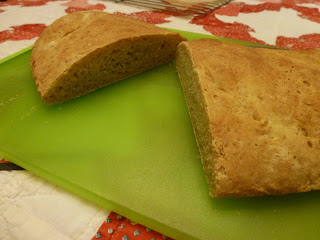 I wasn't going to participate this week but after seeing some of the other posts, I relented. Hated to miss out, even for a good reason. The recipe can be found here or here, links to other blogs are here.

Last week the library called to say that a book I put on reserve ages ago had come in. Oh, how I wish I hadn't read it. There are some things you don't want to know. Especially when you're learning to bake. The book was Wheat Belly, by Dr. William Davis. 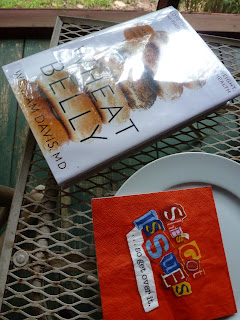 What an eye-opener.  I realized that I knew very little about wheat.  Just when I was getting over the whole corn thing too.

You know, you think "whole wheat" = good thing!  That's where it lived in my brain. Never questioned it for a moment. Ah yes, there are all those gluten-free people, but they have some kind of disease, don't they? 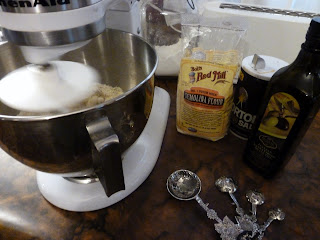 Turns out there's more to the story.  And yes, the good doctor has a definite bias (one of my Facebook friends called the book "dogmatic").  But that doesn't change the facts. 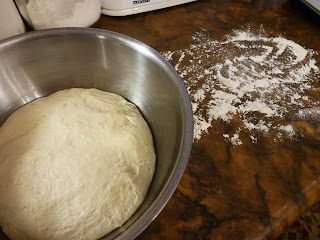 Did you know that 2 slices of whole wheat bread have a glycemic index of 72?  That's higher than 2 slices of white bread (69), 2 tablespoons of sugar (59), or a Snickers bar (41)! Which means that it sends your blood sugar higher faster.  That one blew me away.  Apparently this is not in dispute and has been known for years.


And then there's the whole hybridization thing. The wheat that's available today bears very little resemblance to the wheat that was grown in the mid-20th century. Did you know that today's wheat is 12"-18" tall? No more amber waves of grain. And yes, this has helped feed a starving world.  But it has also changed the wheat which apparently adds the chromosomes from both parents. It ends up with twice as many when it's hybridized, unlike many organisms (including humans) whose offspring have the same number of chromosomes as the parents. Plus, there's an issue with genetic modification. The proteins and enzymes in wheat now are new to the human experience. It was a very scientific book. Don't read it. You'll be sorry.


Basically, the point of the entire book was that there's a chance that the consumption of wheat could contribute to everything from diabetes and Crohn's disease to Alzheimer's and cancer. I know that sounds crazy. So, I'm going wheat-free for a month. It's a scientific experiment. I want to see for myself whether I feel better, have more energy, fewer food cravings, less brain fog, etc.  I'll let you know.

In the meantime, I made something for myself while the bread was rising.  Wheat-free cheesecake (the crust is made of nuts).  Stopped by the Thursday Farmer's Market in town and found this wonderful jelly to put on top of it. It's Pomegranate Moscato, made by an 11-year-old boy!  He was the cutest thing.  And the jellies he makes are amazing and very reasonably priced.  Here's more info. Some days you just never know who's going to cross your path. 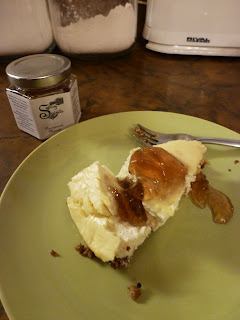 My husband hasn't read the book.  Neither has my neighbor... 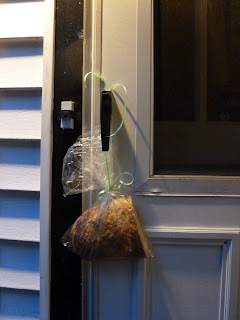 A shoe for you.  Not very exciting, but I saw it while the dough was rising.  Can't believe the picture came out since I took it over my shoulder while driving in rush hour traffic. 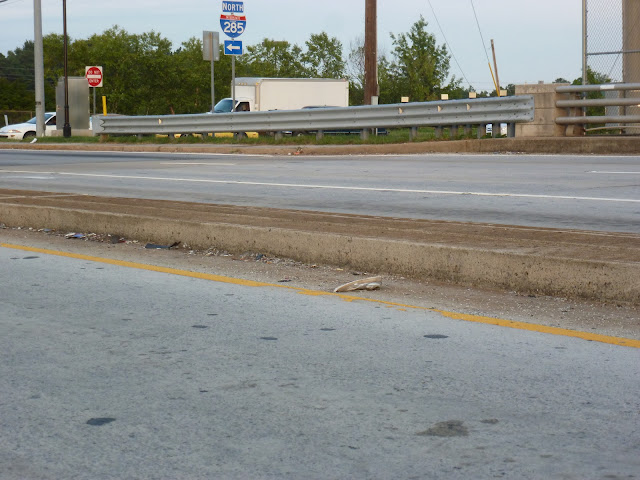 TWD/BWJ: Hazelnut Biscotti (with no hazelnuts) 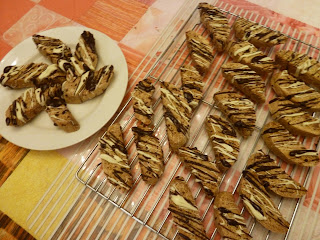 I never thought of biscotti as something that a person would make at home. It was a revelation. Easy as can be. Couldn't find hazelnuts at the first 3 stores I tried, and was too lazy to keep looking, so mine was Almond Biscotti. I drizzled a little white and semi-sweet chocolate on them. The recipe can be found here or here, and links to other participants are here.

Can I say right up front that I had a little issue with the actual cookbook? The ingredients are listed on one page and the instructions on the next.  Flipping back and forth, with the ingredients for another biscotti recipe listed on the previous page - well, I mixed up the wrong dry ingredients before I realized it.  Kept thinking I didn't remember cinnamon being in there, and it specified baking powder when I thought we were supposed to use baking soda... Had to toss and start over. 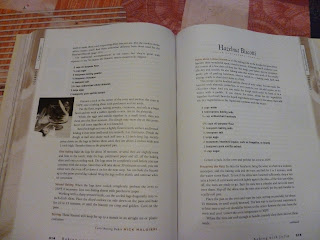 And while I'm fussing, might as well admit that I've dropped the book on the floor at least a hundred times because of that slippery paper cover. Every time I took it off the shelf, it would slip out.  Finally gave up and removed the cover all together.  I'm using a naked white book.  There.  I feel better now that I've confessed. 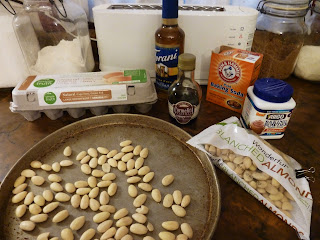 It's been an exciting couple of days around here. Entertainment wise. Friday night we went to see a Cirque du Soleil show called "Michael Jackson, The Immortal World Tour". My husband bought the tickets in 2010.  I'm just glad we remembered to go after all this time. Our seats were 5 feet from the stage. 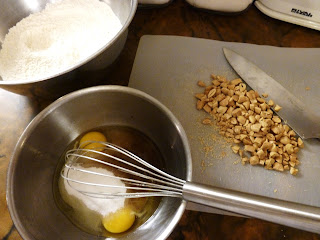 There was more singing and dancing that a normal Cirque show, and they did all the incredible stuff too. The performers even swung out over the audience which was kind of scary.  The costumes were unbelievable. And of course the music was, well, Michael Jackson. Every favorite song. Huge videos of him. I think it must be the closest thing to a Michael Jackson concert that's possible at this point. Impressive but also a little sad. There was a graveyard scene in the Thriller piece that hit a bit close to home. 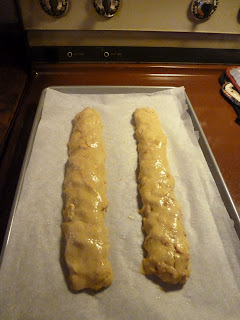 And last night we saw Coldplay.  If you ever get a chance to see this band, GO.  You don't even have to know the music to have a great time. Everyone got a wristband when they came in the door.  During the concert those wristbands came to life and lit up. Controlled by a computer somewhere.  Sometimes they blinked to the beat of a song, sometimes they twinkled, sometimes they stayed dark. There was not an empty seat in the arena and it was a sea of lights. Totally made you feel a part of the show. 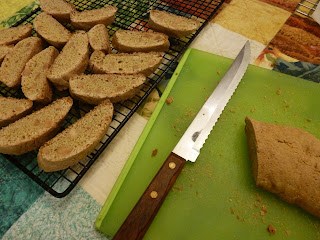 There was also confetti, and huge balls that looked like planets falling from the ceiling, and a performance that included Rhianna on video.  At one point, the band emerged in the middle of the crowd at the back of the room for several songs. "We love the people in the back!" they said. Mostly, the music was great and the band LOVED what they were doing.  You could feel it. I've been to lots of concerts and this was one of the best. 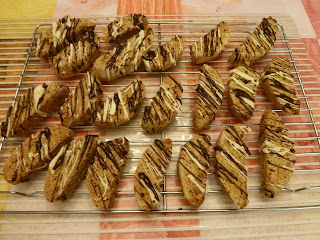 Well, the Biscotti's done now. Here are a couple of pictures from the shows. 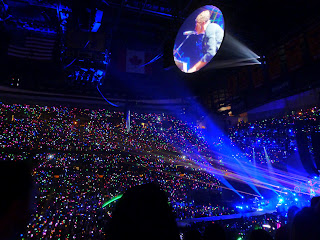 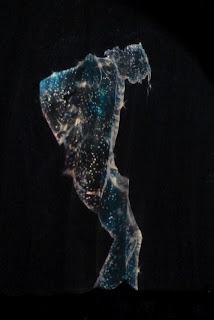 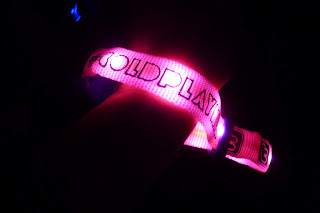 And a shoe.  This one was in Richmond, VA. 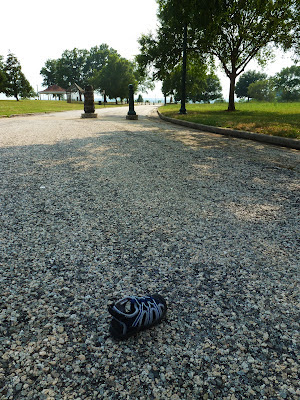 Goodness Gracious!  Two weeks late, but just under the line before the next recipe. Didn't want to miss out on anything with "French" and "Strawberry" in it's name.  The recipe can be found here and here. And the list of blog links for those participating in the Tuesdays With Dorie/Baking With Julia project is here. 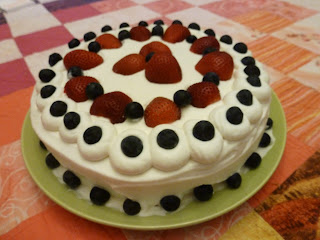 Too much going on to report on it all, but I will say that my daughter and I went on a road trip which is why this is late.  Our road trips go like this: choose 2 possible directions, flip a coin (we have a special one), 2 out of 3 wins, drive, see as many quirky things as possible, eat where the locals eat, find a place to sleep, and start over the next day. The coin took us through the Carolinas, the Virginias, Pennsylvania, Maryland, and DC.

Let's see what we were doing on the missed Dorie day... June 19th...  looks like we made pretzels at the oldest pretzel bakery in the US, saw a house in the shape of a shoe (!), and spent a little time at Baltimore's Inner Harbor.  Just a little taste of one of the 10 days that we were on the road.

Now for the Strawberry Cake.


Now for this week's shoe (other than the shoe house of course!)  We saw several on our trip - it's SO hard to decide which one!  This one was spotted in New Market, Virginia.  A beautiful day after we'd done a cave tour and been through a huge garden maze.