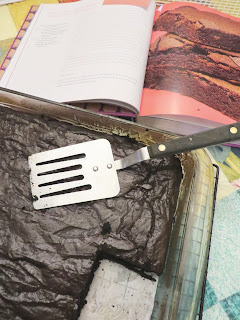 No reason to beat around the bush.
These are FANTASTIC!
Remarkably Wonderful for sure.

I've mentioned in the past that we have our own family favorite brownie recipe. It's called Susan's Secret. My mother named it that when I came home from across the street (Susan's house) with the brownies and the title-less recipe. It's always been our go-to because of the amazing flavor and tender gooey-ish interior. But no matter the oven, they always came out with tough edges. Not just crunchy or chewy, but... hard. One year my daughter baked Susan's Secret to sell at the school Business Day. She invented a new product by re-branding the cut off edges as "Brownie Sticks". Brilliant idea. They sold out. 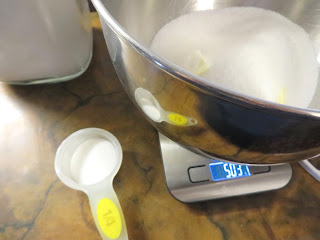 The reason I mention Susan's Secret is because these seemed like they might be similar. Thought I'd compare ingredients. Quelle horreur! The recipe has disappeared! This is a tragedy of mammoth proportions. Except...

Thank you, Jesus! (actually Sebastian! or Dorie!) These are very similar to Susan's Secret with much better edges. Every little bit was amazing. We gobbled them up quick. 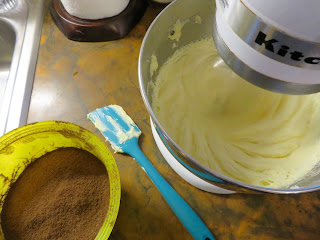 OK, I do have a question if anyone cares to respond. Do you see that scale? I have discovered that the volume measure of my dry ingredients yields way more than going by weight. I know the scale is correct because pre-weighed products like butter or packaged raisins are spot on. But my flour and sugar are just wrong. For instance, in the photo above I've only put in a little more than 2 cups of sugar and it's already at 503g. But the recipe says that 2 1/2 cups is 500g. That's a pretty big difference. I've been using too much sugar and flour in every recipe. Am I the only one who has noticed this? It makes me wonder how different other recipes would have turned out if I had a decent scale a couple of years ago. So, lesson learned. Weigh everything. 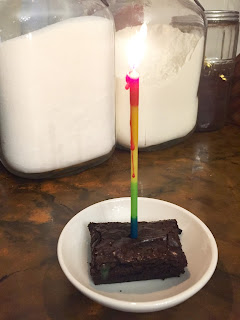 Quite a large chunk was consumed while the pan was still pretty hot. I mean really, Dorie! What's the point of making fresh brownies if you're not going to eat them warm? We don't let that opportunity pass in this house!

There is one little thing. This recipe doesn't include nuts. My husband recently passed away and I could hear him fussing in my head that they needed nuts. He loved nuts in a brownie. It was a bit of an issue for him. So next time, these will have nuts.

The other Tuesdays With Dorie bakers can be found here.

And now, a shoe. We were arriving at the hospital last 4th of July. It was the beginning of the end but we didn't know it then. Michael spotted the shoe and pointed it out to me, walking ahead while I lagged behind to get the picture. Love you, honey. Until we meet again. 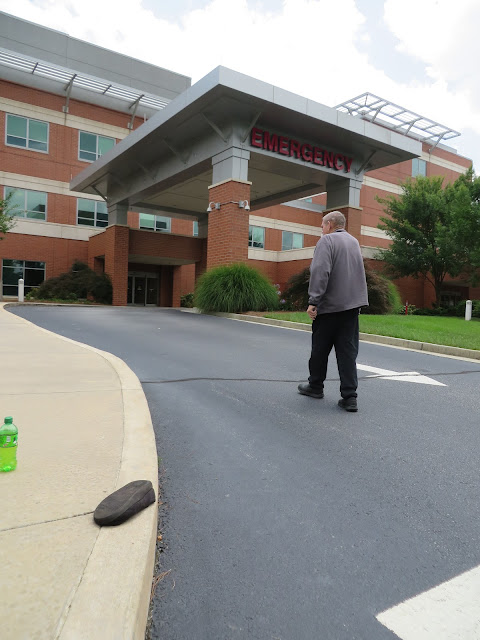