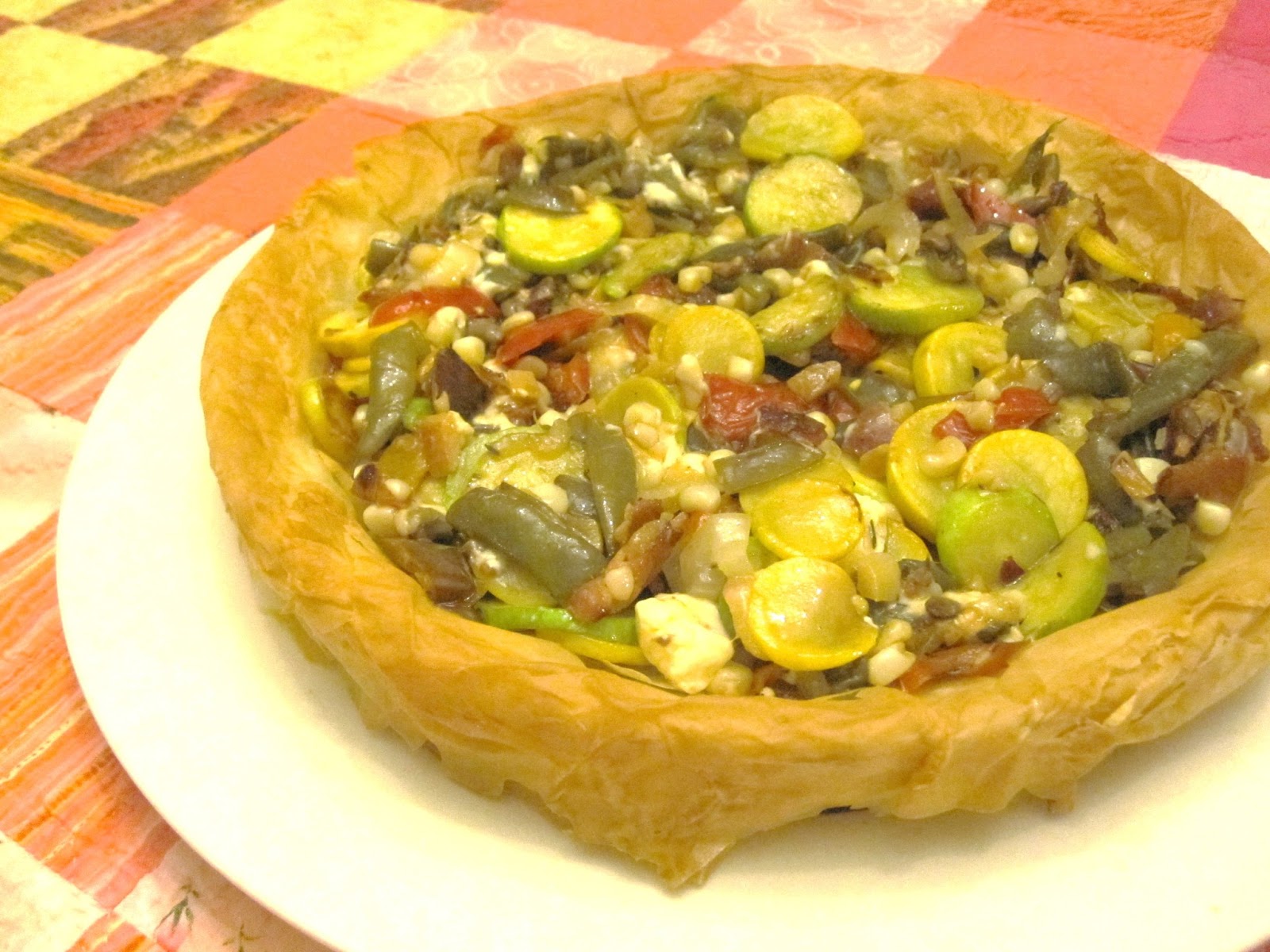 I'm in love! I'm in love! I'm in love! Did I mention that I'm in love?!? You know, just when I think that Tuesdays With Dorie is getting a little old, or too much, or I don't know enough and should probably drop out - a fabulously easy and amazing recipe comes along. Can I shout out a huge THANK YOU to whoever has been picking the last several recipes? I think I'm getting a second wind here. 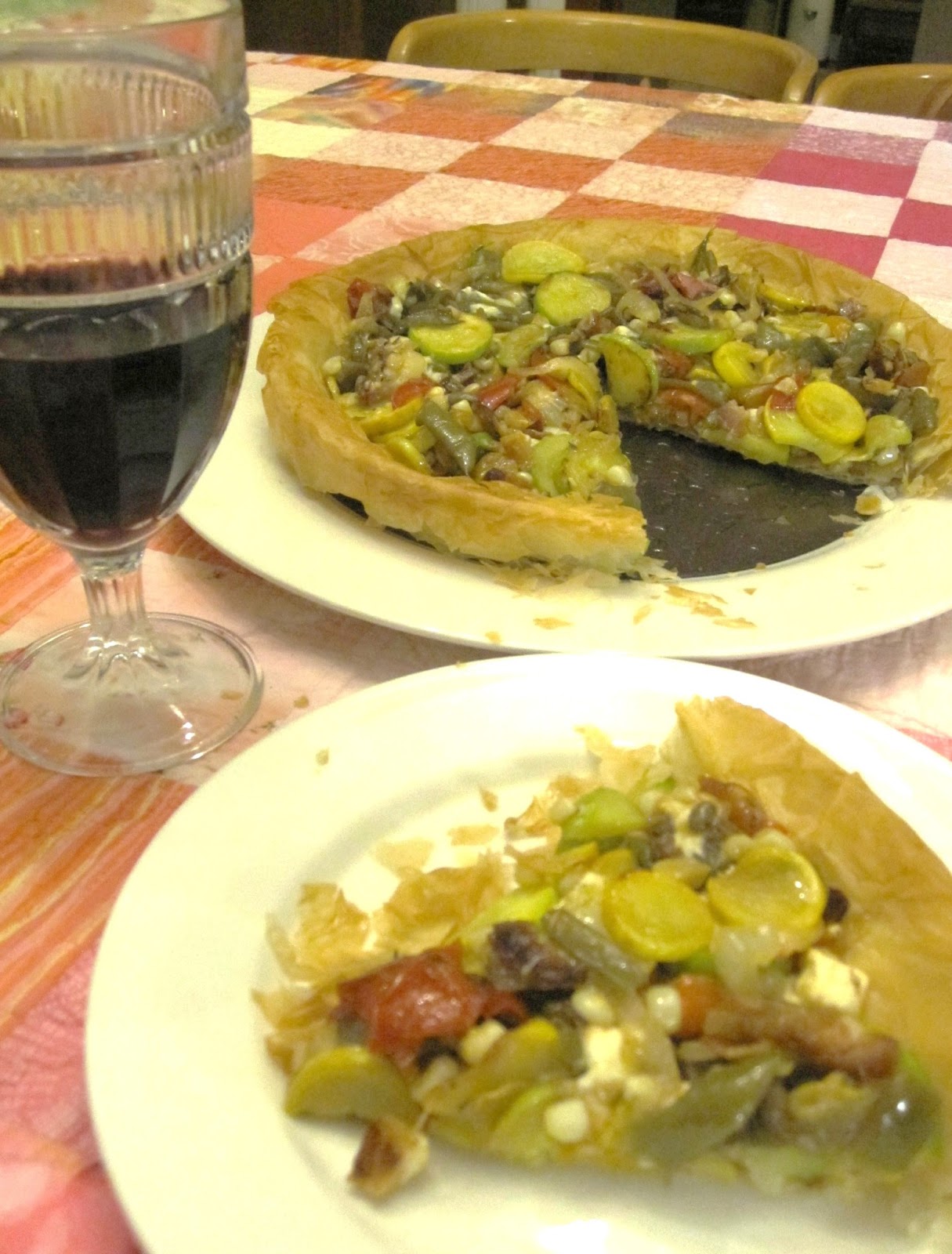 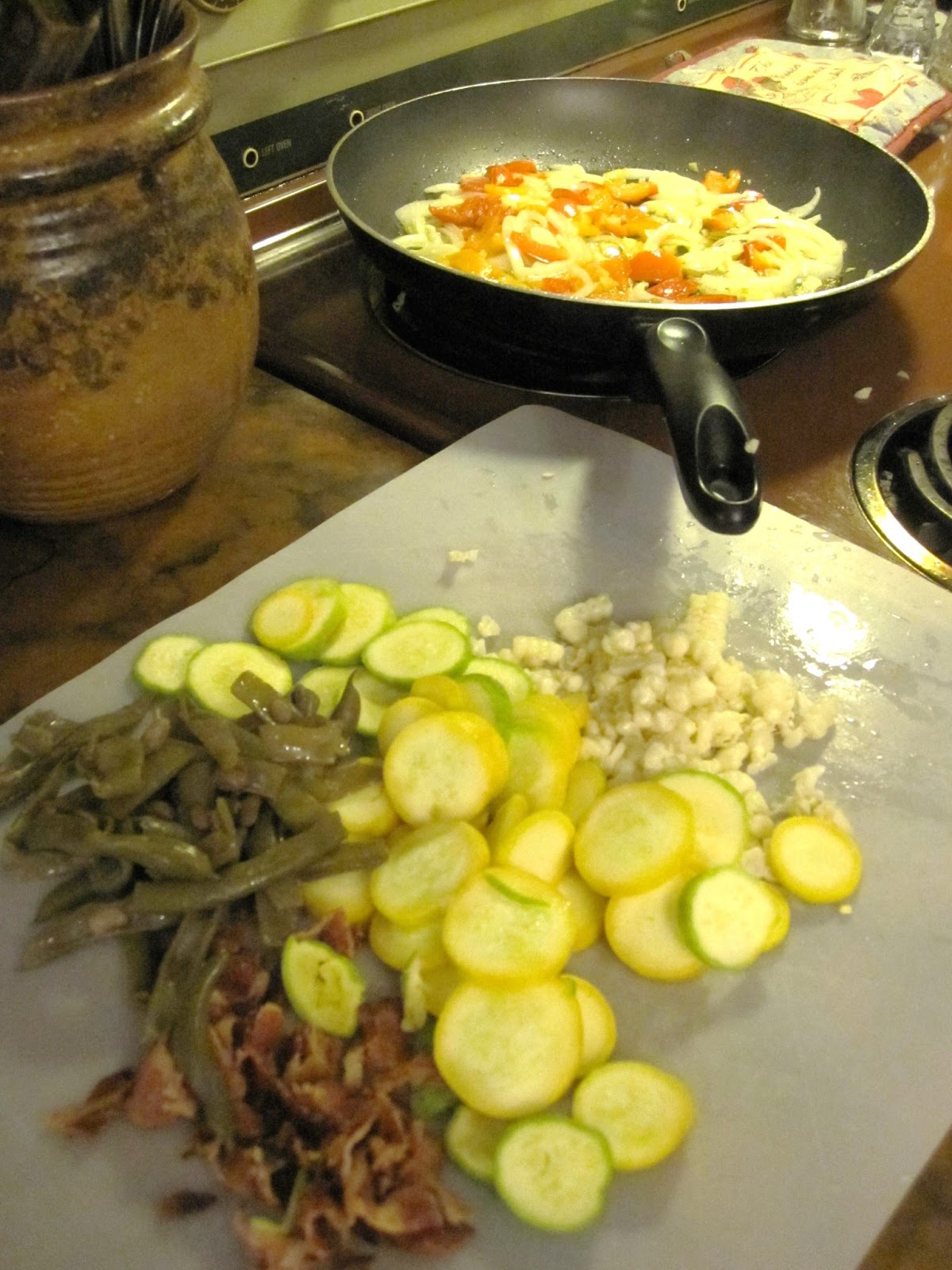 True confessions: I've never used phyllo before. I mean NEVER. I expected something hard to work with. Beyond my abilities. Have only eaten it in baklava from a restaurant. And that's just not something I'd want to make an entire pan of. But - hello? - phyllo as a crust? filled with an assortment of sauteed vegetables? Let me say it again - let me shout it from the highest rooftop - I'M IN LOVE! 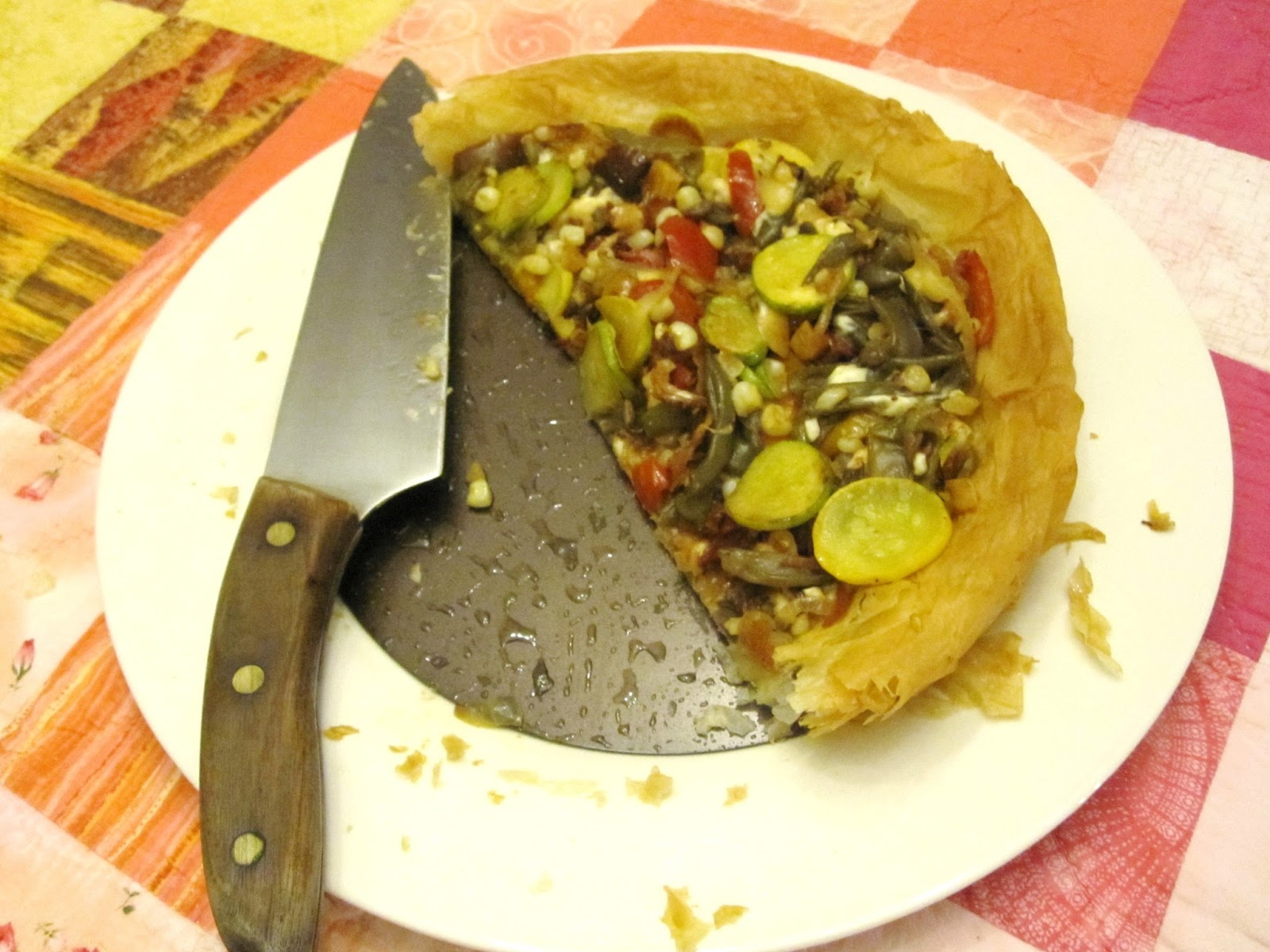 I could make this any old time. And no, I didn't stick with the "exact" recipe as far as the filling goes. Heck, there was a variety of CSA stuff in the fridge that needed to be used, why buy mushrooms? This is a perfect recipe for using up leftovers, which is exactly what I filled it with. I cut the kernels off a leftover cob of corn, chopped up a couple of squash, even threw in some previously cooked green beans and a couple of pieces of bacon from the latest round of BLTs. And tossed in some feta (it's what I had). I can imagine this filled with roasted root vegetables in the fall. Oh my gosh, it took serious willpower to keep from eating the entire thing by myself in one sitting.

The only thing that stopped me was the thought of dessert. I'm going to share another incredible discovery. If you haven't had Graeter's ice cream, well, let's say it's worth the splurge. Last by not least, here's a boot that I spied on our own street, complete with a matching belt (look closely in the distance). Some days, I can't believe the things that show up. 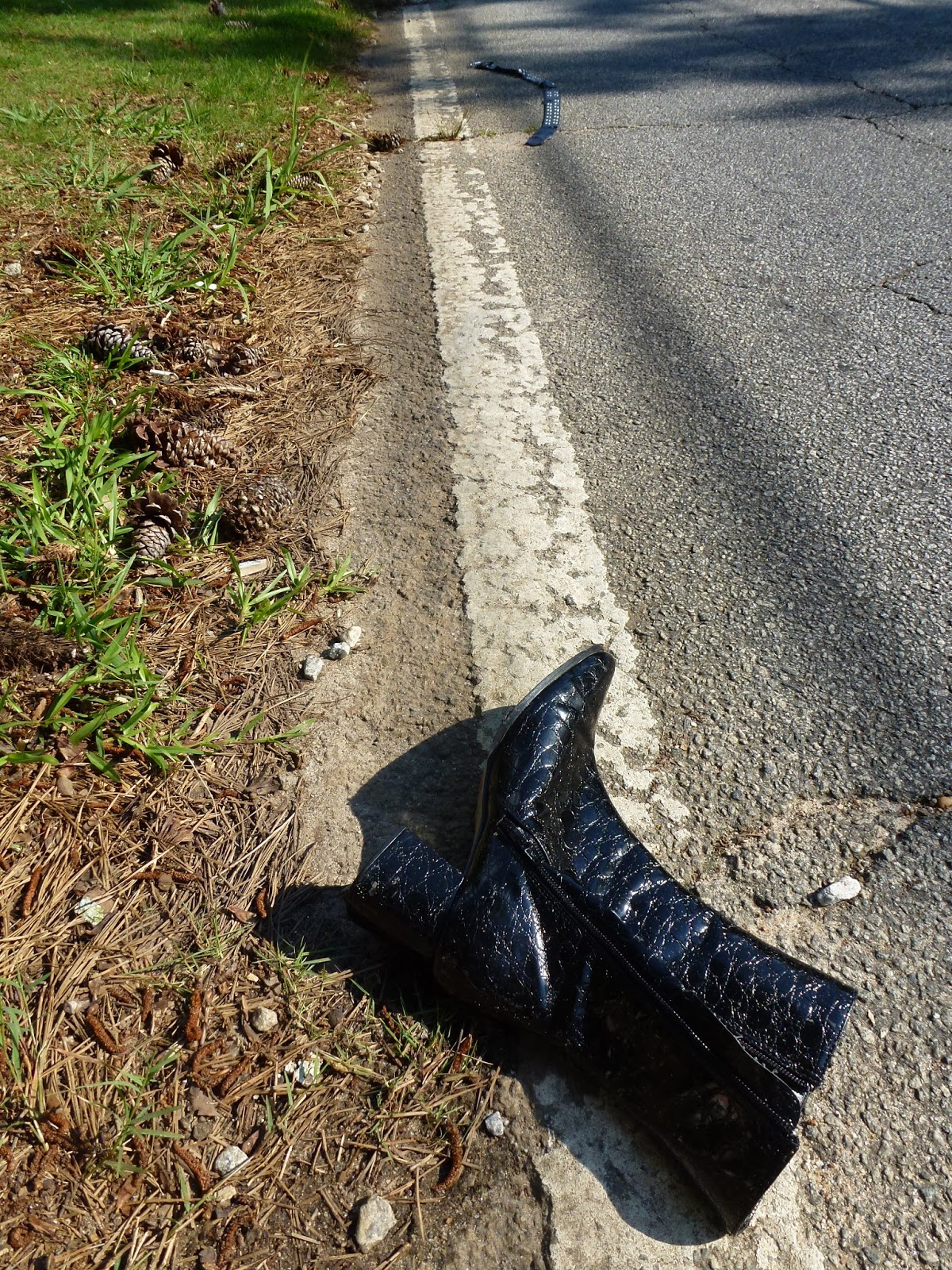 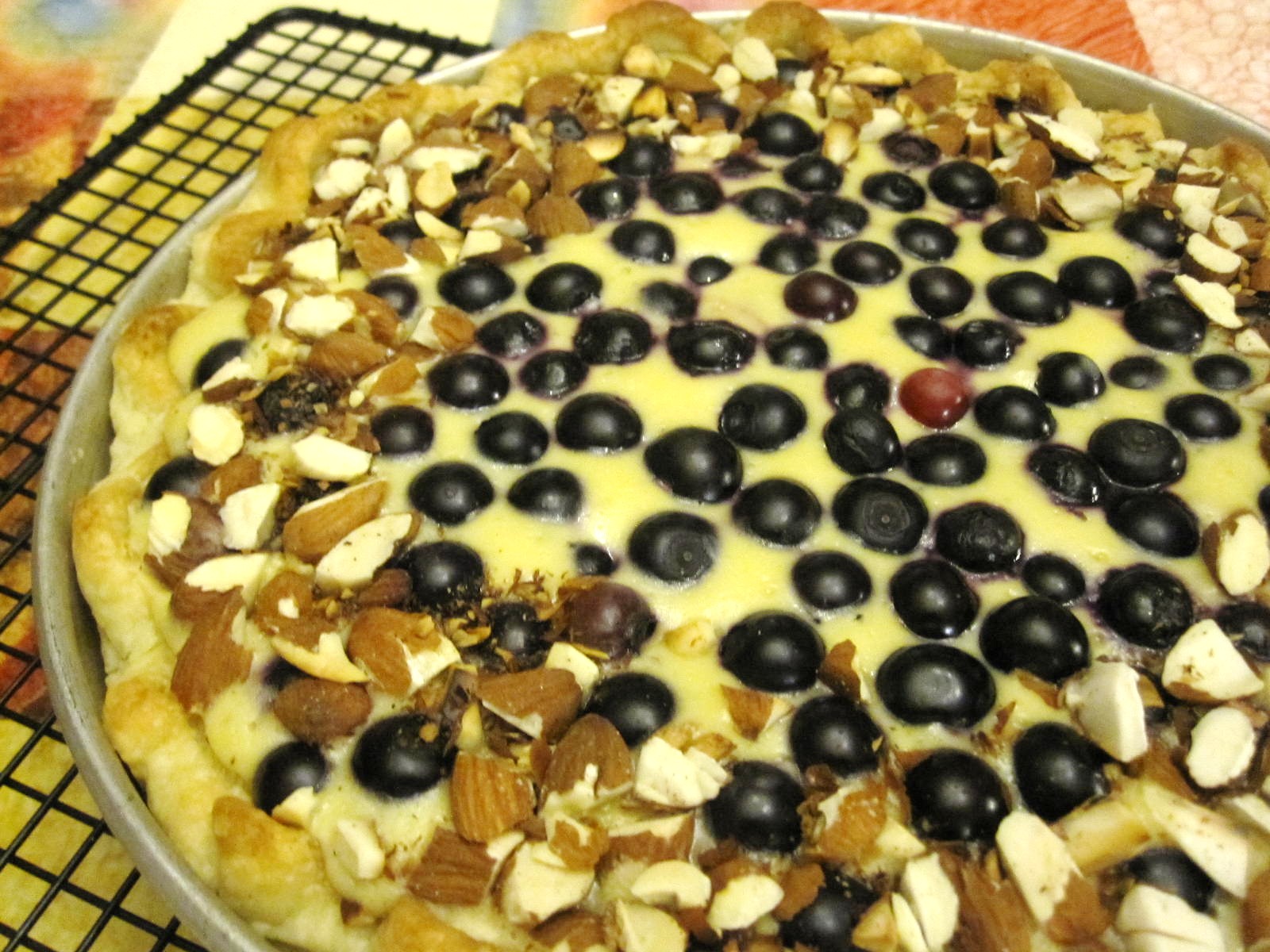 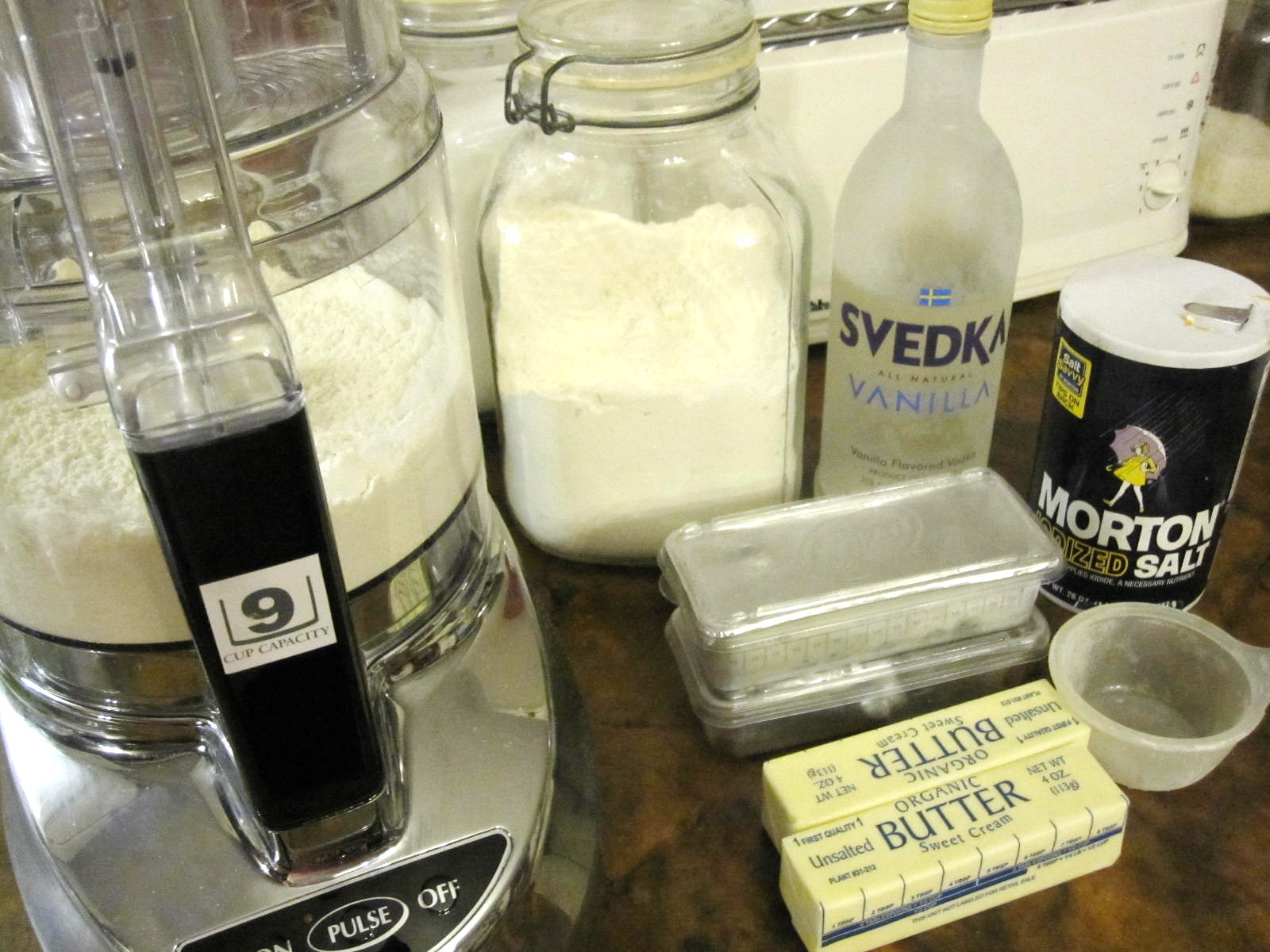 My father grew up in St Louis. When I was a girl, we made the 3 hour drive there to visit my grandparents several times a year. We'd go at least a couple of times during the summer to see the Cardinals play. The sound of Cardinals baseball on the radio was a defining feature of my childhood.

Some years we'd make a trip during Christmastime, the highlight being a visit to the North Pole at the Famous-Barr department store. It was unbelievably enchanting with it's trees and snow and twinkly lights - even waiting in line was a treat! Santa would give us a little slip of paper that we traded in for a real present after we'd divulged our secret desires and had our picture made with him. 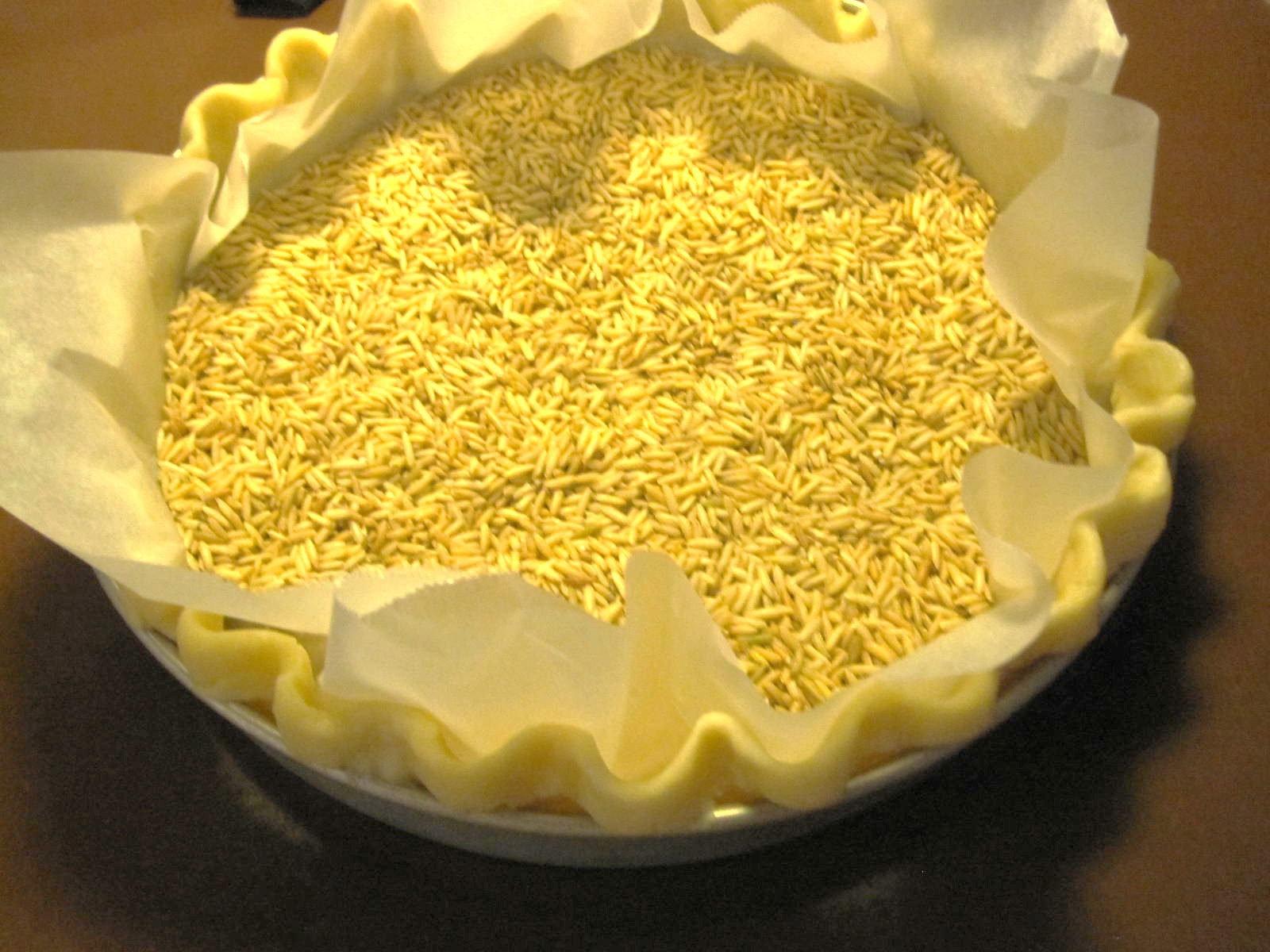 There was a grocery store in St Louis called Schnuck's which was also a wonderland in the eyes of a young girl from a small town. We'd go along with Grandma to Schnuck's and bring home a cheesecake-like pastry from their bakery. It was round, with a bread-ish crust, and was strewn with raisins. We ate it for breakfast. I've spent years trying to re-create that taste. Then out of the blue comes Baked Yogurt Tart. It didn't have a bread-y crust, and it didn't have raisins, but it was the closest thing I've come to the taste of that breakfast at Grandma's in almost 40 years.

Next time, I'll add a bit of cinnamon and scatter a few raisins on the top. And maybe I'll even take down the little drinking glass with my name on it and fill it up with milk. All the cousins had one. The glasses lived on a shelf in Grandma's kitchen closet above the shelf that held her blue and brown Russell Wright dishes.  How I would love to have those dishes today. I think I'll head over to eBay now...

The recipe for Baked Yogurt Tart can be found here - I used a Foolproof Vodka Piecrust instead of the flaky one. Note to self: go ahead and use the tart pan with the removable bottom next time. The other Tuesdays With Dorie bloggers are found here. I think we might be close to halfway through the Baking With Julia cookbook now. 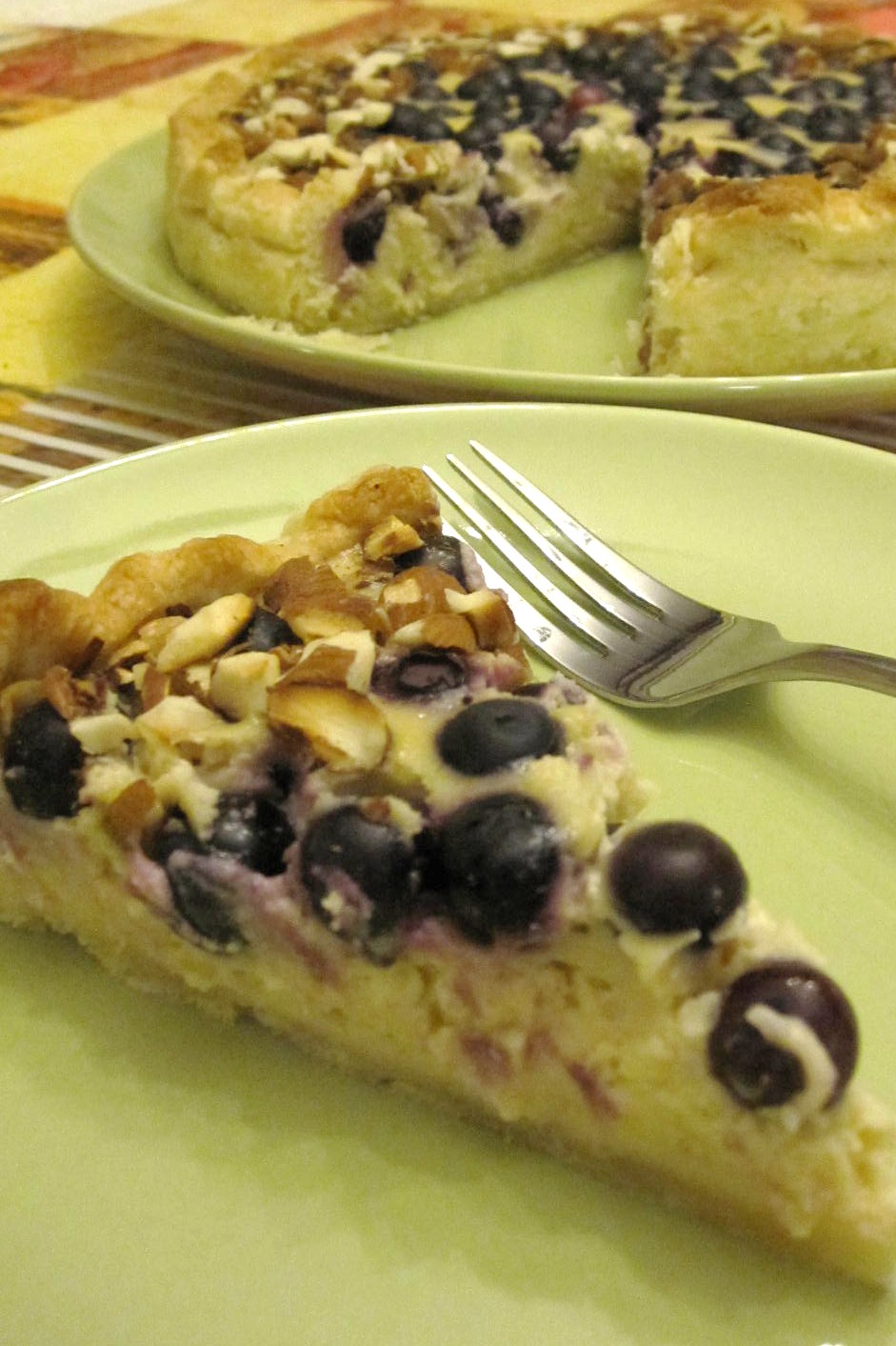 Here's a shoe I saw this week. Didn't have time to stop for the picture when I first saw it, but came back a couple of days later and it was still there! 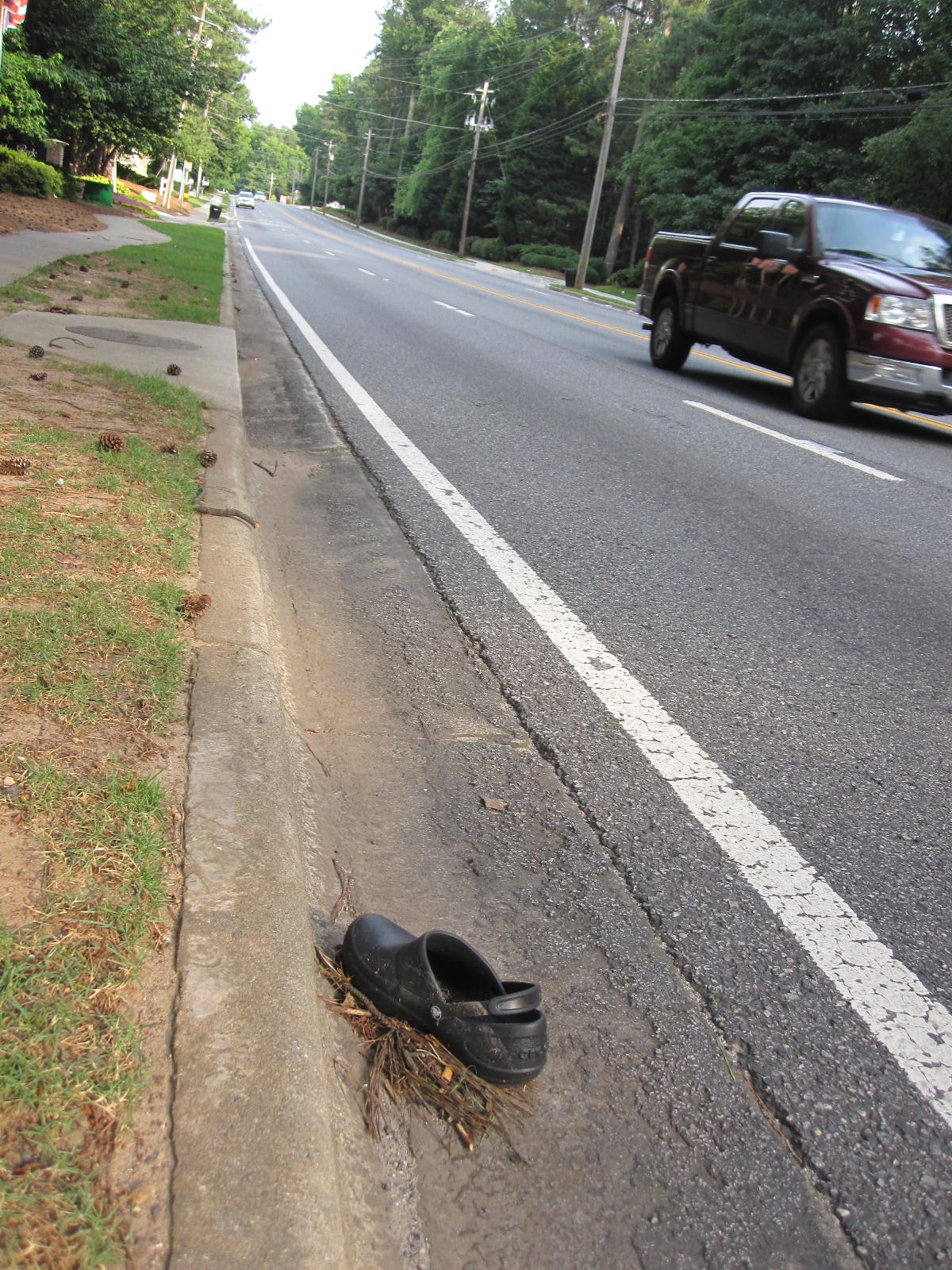